After going official, more tests of the AMD 4700S CPU-based DIY Desktop KIt have been published by Korean Tech outlet, Bodnara. The tech outlet posted a full-on performance review of the kit and showed how it performs.

We have talked about the AMD 4700S Desktop Kit multiple times before as it was listed by Chinese retailers. The kit has now been officially listed by AMD and we do get a sense of where AMD will be trying to market it. According to AMD, the 4700S DIY desktop kit is an all-in-one solution that comes with the CPU (and cooler), motherboard, and memory in a singular unit. All you need is a GPU, PSU, storage, and casing to get this thing up and running.

So looking at the specifications, we first have the AMD 4700S which is an 8 core and 16 thread chip based on the Zen 2 core architecture. The CPU clocks up to 4.0 GHz and features a 12 MB cache. Do note that the frequency alone puts the chip faster than the APU on the Xbox Series X which clocks up to 3.8 GHz. We can expect the user to share pictures with the cooler removed so we can get a better look at the die. Following is the Xbox Series X & PlayStation 5 motherboards for comparison (Image Credits: IFixIt):

On the other side, this chip has the iGPU disabled which is the whole reason the chip ended up like this in the PC DIY segment. The Xbox Series X makes use of a custom RDNA 2 GPU with 12 TFLOPs of compute power, 52 Compute units running at 1.82 GHz, and is fed by 16 GB of GDDR6 memory. 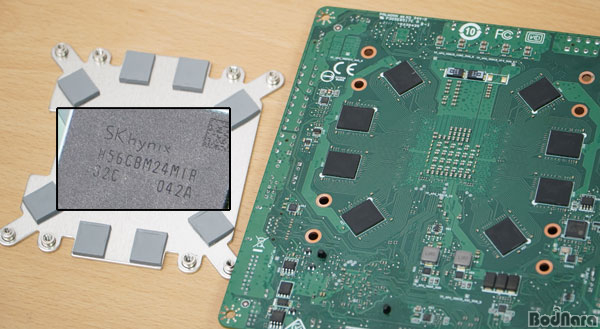 Here’s the interesting part, the AMD Cardinal motherboard being used to house the AMD 4700S chip does retain the 16 GB onboard GDDR6 memory. This means that there are no standard DIMM slots on the board and the system memory is fused directly to the motherboard. AMD lists down both 8 GB and 16 GB GDDR6 memory options for its 4700S Desktop Kit. The memory modules are located on the backside of the motherboard which look similar to the Sony PS5’s PCB design and are SK Hynix chips bearing the ‘H56CBM24MIR 32C’ label. These are 2 GB modules with a peak transfer speed of 14,000 MHz.

The motherboard has a standard spiral aluminum-fin-based heatsink and the PCH is also covered by a heat shrink. In terms of expansion, the motherboard features a single PCIe Gen 3.0 x16 slot but is limited to a PCIe 2.0 x4 interface, front panel USB 3.0 header while the rear panel I/O includes four USB 2.0, four USB 3.2 (3x Gen 2 / 1x Gen 1), a Gigabit Ethernet port, and a 3-channel HD audio jack.

As for power delivery, the motherboard features a 5-phase VRM design for the AMD 4700S APU & a 3-phase supply for the memory. The APU is powered by a single 8-pin connector while the board is powered by a 24-pin ATX connector. The motherboard comes in a Mini-ITX form factor & can run any graphics card as long as you feed it with the necessary power.

Due to power constraints and limited to smaller SFF PSUs, the AMD 4700S Desktop Kit will support up to Radeon RX 590 and NVIDIA GeForce GTX 1060 discrete graphics cards. A minimum 250W PSU is suggested with a 300W PSU recommendation. The test setup included a 300W PSU and an AMD Radeon RX 550 graphics card. An Intel Core i7-11700 Rocket Lake CPU with its built-in Xe UHD 750 iGPU was compared to the AMD 4700S. The test results show far higher latency for the system but at the same time, the bandwidth is really high thanks to the GDDR6 memory compared to standard DDR4-3200 memory used on the Intel test platform.

In 3DMark, the AMD 4700S DIY desktop kit offers better GPU performance thanks to its discrete solution, and the same is seen in standard gaming titles at 1080p. It is estimated that the cost of the kit including the Radeon RX 550 is around 500,000 Won which is roughly around $400-$450 US. The Intel Rocket Lake Core i7-11700 alone costs around $333 US and you have to add in the cost of a motherboard and memory to match the DIY kit. So overall, the price to performance value looks great and will make for a nice budget gaming and HTPC build.

Bandai Namco and Toei Animation delayed Digimon Survive (PS4, Switch, Xbox One, Steam) from 2021 to 2022 – The tactical JRPG featuring choices that matter and can led to character deaths has been delayed several […]

Rocket League x James Bond crossover targets July 29 as its release date. Let’s find out more about this new, surprising crossover. Since its acquisition by Epic Games, Rocket League has turned into a light […]